Yala National Park and Safari – on the map, photo, how to get on 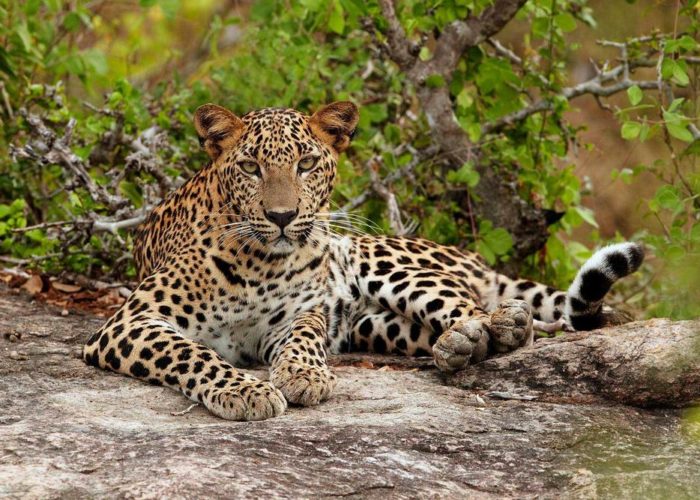 Yala combines a strict nature reserve with a national park. Divided into 5 blocks, the park has a protected area of nearly 130,000 hectares of land consisting of light forests, scrubs, grasslands, tanks and lagoons. Two blocks are currently opened to the public.

Situated in Sri Lanka’s south-east hugging the panoramic Indian Ocean, Yala was designated a wildlife sanctuary in 1900 and was designated a national park in 1938. Ironically, the park was initially used as a hunting ground for the elite under British rule. Yala is home to 44 varieties of mammal and 215 bird species. Among its more famous residents are the world’s biggest concentration of leopards, majestic elephants, sloth bears, sambars, jackals, spotted dear, peacocks, and crocodiles. The best time to visit Yala is between February and July when the water levels of the park are quite low, bringing animals into the open.

It’s home to Panthera pardus kotiya, a majestic leopard endemic to Sri Lanka. But among the glorious spectacle of wildlife, you’d also witness the tell-tale signs of a lost civilization. The Monastic settlement of Sithulpawwa, an important pilgrim site, is said to have housed 12,000 inhabitants seeking solace, some 2000 years ago. The restored rock Temple, among a series of well-preserved ancient temples offers a glimpse into a glittering past. What is today a pristine wildlife kingdom, Yala was home to a thriving civilization, dating back to the glory days of Sri Lankan Kings. Hundreds of tanks, most in dilapidated state today, are testimony to an agri-based civilization. The large, thriving tanks now provide a lifeline to the animal kingdom, especially during dry season.

Yala is in a hot, semi-arid environment despite its lush greenish look, especially during the monsoon season. Temperature ranges from 26°C to about 30°C. The North-east monsoon season is when Yala gets most of its rainfall from September to December. The monstrous Tsunami of 2004 struck the park on that fateful day of December 26. Some 250 people in and around the park were consumed by the rampaging waves, also forever changing the land features of Yala’s coastal belt.

The most fascinating discovery in the Tsunami’s aftermath was that no animals were in harm’s way, prompting a theory that ‘sixth sense’ of animals took them out of the path of on-coming waves. Findings based on two elephants with electronic collars suggest that reactions based on quick comprehension of clues may have prompted all the animals to escape the waves; a faculty that didn’t help people. A Tsunami memorial is constructed at Patanangala, reminding visitors of the devastation it caused and the lives it took. Visitors are allowed to get off at this point by the beach.

Yala is all about convergence of magnificence and endurance, painting a picture of eternal beauty and mystery. It’s a vast deciduous forest where the land gives up its green top, exposing vast expanses of open terrain dotted with grasslands and shrubs, tanks and lagoons, water holes and sand dunes. Despite its lack of a thick forest cover, animals are still experts at taking cover from prying eyes.