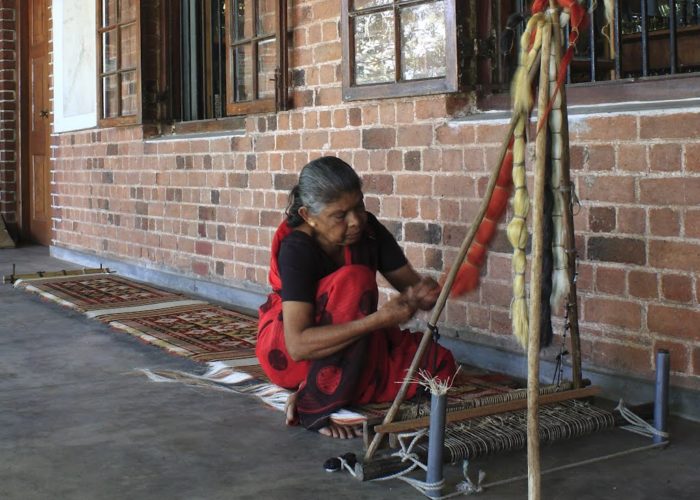 The unique woven Dumabara cloth of Sri Lanka was once created for royals and the aristocracy; expensive tapestries, mats and clothing that took weeks to weave and fetched a premium price. For centuries the cloth was woven by master weavers in a family tradition that, though dwindled, has never disappeared.

The spectacular Dumbaragama Valley, home to the famous weavers who bear its name, lies almost 200km from Colombo, in the Kandy District. Uda Dumbara, the town at the head of the valley is about an hour’s drive from Kandy. The Kalugala – Uda Dumbara Road twists through this peaceful valley to Thalagune, the base of the valley, 200m below the flanking ridges.

Most of the Dumbara weaving families continue to live and work in this village, in low buildings hidden in the trees below the road. In ancient times, the weaving was with hemp on low pit looms, each family most likely using a single loom. Today it is done with cotton, woven on free standing looms that are grouped in airy workshops next to the family homes.

A century ago, the hemp leaves would be crushed against blocks of wood until only strong flexible fibres remained. These would then be spun into thread on a hand-turned wheel before being woven on the loom. Today, the raw cotton thread arrives in small bales, which must be spun onto spindles, and the same spinning wheels are used, the operator sitting on the floor.

Once the thread is spooled around the spindles, these could be used on the looms in almost the same way that the hemp was. Nothing much has changed in centuries.

With the switch to cotton, these Dumbara weavers have a wider repertoire than they traditionally did; from the cushion covers to handbags. The weavers’ skills have also attracted designers from Kandy and Colombo city who have introduced silk to the traditional weave, creating new and colourful pieces of clothing. Dumbara creations have been exhibited in India, Germany, and the United States.

Y G Premachandra, an established master weaver, has been engaged in the traditional craft for over forty years, having learned the art as a boy from his parents. Created in his mind, the designs are then transferred to the thread by his fingers without ever being sketched out or set to paper in any way. Even when he instructs his apprentices on a particular design, he does it only by word of mouth, describing the patterns he wants. The finished products are intricately woven and intensely colourful, an evolution of the subtler colours of tradition.

Another master weaver, Sarath Wickramasinghe, learned the art more recently. A former dockyard worker, he married into a traditional Dumbara family twenty years ago, applying himself and quickly grasping the skills. His designs are closer to the traditional patterns of centuries before, simpler and with the softer colours seen in older hemp pieces. He shows me a diya kachchiya he created for an exhibition. A traditional 18th Century bathing costume worn by kings, it resembles a double-sided apron with long ties to secure it at the waist. In spite of its intricacy, the garment is a single piece, completely seamless, and it also took the master weaver three weeks to weave. The only other example of such a diya kachchiya in existence is an original at the National Museum in Colombo. Wickramasinghe’s artistry will soon be passed on to his daughter, who intends to modernise the craft further.

While even the relatively simple pieces such as a wall hanging or even tablemat can take two days to create, the special pieces commissioned by designers can take weeks of work. Therefore, the amount of labour that is expended, make these Dumbara creations quite expensive, niche creations.

Today, the greatest hindrance to the weaver’s art is the lack of trained and also willing labour. With modern families being smaller than they once were, these weaving families have resorted to hiring help to work the looms. This is proving hard as many young people opt for an urban lifestyle in the cities over a traditional rural one.

The art of weaving once existed all across the Kandyan Kingdom, and still remains in other small pockets, such as Menikhinna, closer to Kandy, where the Dumbara name and style is also used. However, the village of Thalagune, in the Dumbaragama Valley, is truly its home; unbroken generations of traditional weaving families who once wove for the kings, and fully intend to keep creating their unique art as long as discerning customers demand it.