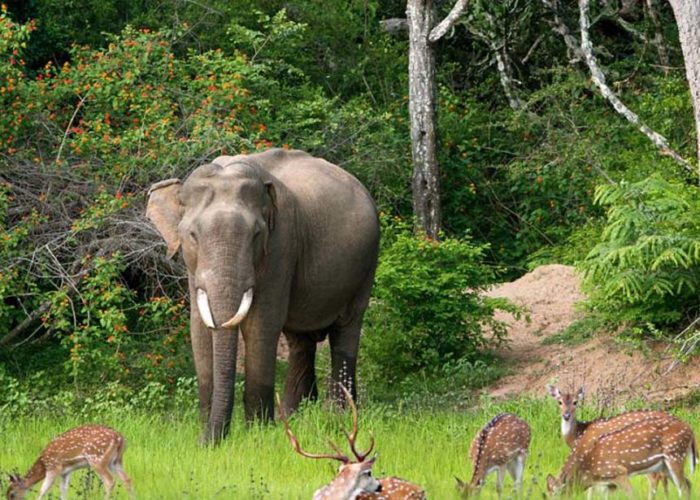 Willu-pattu or Land of Lakes is a park located on the island of Sri Lanka. The unique feature of this park is the existence of “Willus” (Natural lakes) – Natural, sand-rimmed water basins or depressions that fill with rainwater. Located in the Northwest coast lowland dry zone of Sri Lanka. The park is located 30 km west Anuradhapura and located 26 km north of Puttalam (approximately 180 km north of Colombo). The park is 131, 693 hectares and ranges from 0 to 152 meters above sea level.

Nearly sixty lakes (Willu) and tanks are found spread throughout Wilpattu. Wilpattu is the largest and one of the oldest National Parks in Sri Lanka. Wilpattu is among the top national parks world-renowned for its leopard population. A remote camera survey was conducted in Wilpattu from July to October 2015 by the Wilderness & Wildlife Conservation Trust. A sample of forty nine individual leopards were photo-captured in the surveyed area and the core area density was between that of Yala National Park’s Block I and Horton Plains National Park.

Climate. The Annual Rainfall is about 1000mm and the annual temperature is about 27.2 degrees. Inter-monsoonal rains in March and the northeast monsoon (December – February) are the main sources of rainfall.

Flora. There are many types of vegetation to be found in Wilpattu, including littoral vegetation, such as salt grass and low scrub monsoon forest with tall emergents, such as palu, and satin, milla, weera, ebony and wewarna.

Fauna. 31 species of mammals have been identified within Wilpattu national park. Mammals that are identified as threatened species living within the Wilpattu National Park are the elephant, sloth bear, leopard and water buffalo. Sambhur, spotted deer, mongoose, mouse and shrew are more of Wilpattu’s residents.

Reptiles. The most common reptiles found in the park are the monitor lizard, mugger crocodile, common cobra, rat snake, Indian python, pond turtle and the soft shelled turtle which are resident in the large permanent Villus.

Tourism. From December 1988 to March 16, 2003, the park was closed due to Security Concerns the Country was facing. After nearly 16 years, it was reopened to visitors. Visitors can currently only tour some 25% (75% of the park is dense forest or scrub) of the park. The best time to visit Wilpattu is during the months of February and October. There are a few private eco-tourism groups that show tourists around the park in Safari like trips.