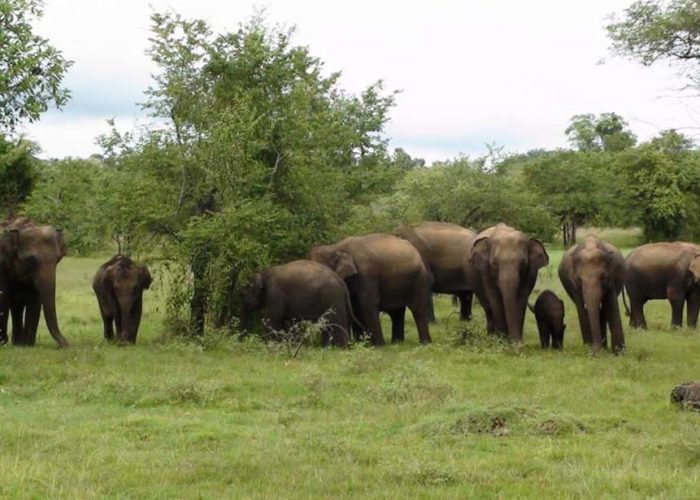 In the Matale and Polonnaruwa Districts of Sri Lanka is situated natural park – Wasgamuwa National Park. It was declared to protect and to make a refuge for the displaced wild animals during the Mahaweli Development Project in 1984 and is one of the four National Parks designated under the Project. Originally it was designated as a nature reserve in 1938, and then in the early 1970s the area was regraded as a strict nature reserve. Wasgamuwa is one of protected areas where Sri Lankan Elephants can be seen in large herds. It is also one of the Important Bird Areas in Sri Lanka.

The name of the Wasgamuwa has derived through the words “Walas Gamuwa”. “Walasa” is Sinhala for sloth bear and “Gamuwa” means a wood. The park is situated 225 km away from Colombo. The National Park’s annual daily temperature is 28 °C (82 °F) and has a dry zone climate. Annual rainfall ranges between 1650–2100 mm. Rain is received during the north-eastern monsoon, from October to January. July–September is the dry season. Highest elevation of the National Park is Sudu Kanda (White mountain), which is 470 metres (1,540 ft) of height. The soil of the national park contains quartz and marble. The forests of Wasgamuwa represent Sri Lanka dry-zone dry evergreen forests.

In the park  are organized jeep safari to watch the wildlife, including camping, 4WD jeeps, guides, photo shoots, barbecues, bike rides, fishing, river baths. The whole complex of services with meals and one overnight stay will cost about 25 dollars per person, for 2 nights – 40 dollars. In jeeps you can get almost to any point of the park and everything to see and capture, so impressions and delight to you is guaranteed.

The park consists of primary, secondary, riverine forests and grasslands. Ruins of Malagamuwa, Wilmitiya, Dasthota irrigation tanks and Kalinga Yoda Ela canal which are built by Parākramabāhu I remain in the national park. In the past water was irrigated from the Minipe anicut’s left bank canal to Parakrama Samudra by Amban ganga which had run through Wasgamuwa.

Yudangana Pitiya has identified as the battleground of the battle between King Elara and King Dutthagamani taken place. A grassland that the Dutthagamani’s army supposed to have camped before the battle is known as Kandauru Pitiya. The ruins of Chulangani chaitya which is built by King Mahanaga can be seen in the national park. Its circumference, 966 feet (294 m) is greater than the Ruwanwelisaya’s. The artifacts that have been recovered from the bricks of the chaitya include a bowl used by King Sri Vikrama Rajasinha and several bronze statues are now kept in the Yudangana vihara.

Wasgamuwa National Park is home to 23 species of mammals. The park is inhabited by a herd of 150 Sri Lankan elephants. Marsh elephant (Elephas maximus vil-aliya) roams in the Mahaweli river area. Both monkeys found in the park, purple-faced langur and toque macaque, are endemic to Sri Lanka. While water buffalo and Sri Lankan axis deer are common to observe, Sri Lanka leopard and sloth bear are rare. Small golden palm civet is another rare endemic mammal.

The number of bird species recorded from the park is 143. This includes 8 endemic species. Endemic red-faced malkoha is a resident bird in this national park. Sri Lanka junglefowl is another endemic bird inhabits the park. Lesser adjutant, yellow-fronted barbet, and Sri Lanka spurfowl are the species that visit the reservoirs and streams of the national park. Peafowl, painted stork, black-headed ibis and Eurasian spoonbill are the park’s other aquatic birds. Rare Sri Lanka frogmouth can be found here. Another rare species, chestnut-winged cuckoo, is seen near the Mahaweli river. Endemic and endangered Fejervarya pulla is one of the eight species of amphibians of the park. Of 17 reptile species recorded in the park, five species are endemic.

Water monitor and mugger crocodile are common in the waterbodies of the park. Skinks Lankascincus spp., lizards Calotes ceylonensis and Otocryptis wiegmanni, and serpent Chrysopelea taprobanica are the endangered reptile species. Endemic Garra ceylonensis and combtail are among the 17 fish species reside in the aquatic habitats of the park. Of the park’s 50 butterflies, eight species are endemic.