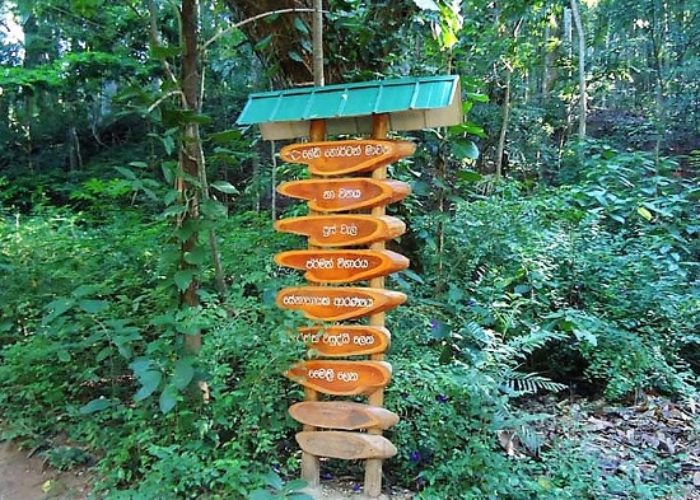 National Park Udawatta Kele Sanctuary, often spelled as Udawattakele, is a historic forest reserve on a hill-ridge in the city of Kandy. It is 104 hectares (257 acres) large. During the days of the Kandyan kingdom, Udawatta Kele was known as “Uda Wasala Watta” in Sinhalese meaning “the garden above the royal palace”. The sanctuary is famous for its extensive avifauna. The reserve also contains a great variety of plant species, especially lianas, shrubs and small trees. There are several giant lianas. Many of small and medium size mammals that inhabit Sri Lanka can be seen here. Several kinds of snakes and other reptiles might be seen. Udawatta Kele was designated as a forest reserve in 1856, and it became a sanctuary in 1938.

The Sri Lanka Forest Department has two offices in the reserve, one of which (at the southeastern entrance) has a nature education centre with a display of pictures, posters, stuffed animals, etc. Being easily accessible and containing a variety of flora and fauna the forest has a great educational and recreational value. Groups of school children and students regularly visit the forest and the education centre. The forest is also popular with foreign tourists, especially bird watchers. Scientific nature research has been carried out in the forest by researchers. The forest is of religious importance as there are three Buddhist meditation hermitages and three rock shelter dwellings for Buddhist monk hermits It has been recorded that the brahmin called Senkanda, from whose name the city’s original name Senkandagalapura derives, lived in a cave in this forest. The rock-shelter or cave now known as the Senkandagala-lena is on the slope above the temple of the tooth and can be visited. The Senkandagala-lena collapsed in a landslide in 2012.

The legend says the brahmin brought a sapling of Jaya Sri Maha Bodhi here and planted it in the present site of Natha Devala. It was used as a pleasure garden by the Kandyan kings. The forest was reserved for the Royal family, and the pond in the forest was used for bathing. The public was restricted from accessing the forest hence the name Thahanci kele (Sinhalese for Forbidden forest). During the colonial era some of the land near the Temple of the Tooth was used to build the Kandy garrison cemetery. In 1834 governor Horton built a path, Lady Horton’s drive, in the forest in remembrance of his wife. Henry W. Cave mentions the trail is about three miles long. Lady McCarthy’s drive, Lady Torrington’s road, Lady Gordon’s road, Lady Anderson’s road, Gregory path, Russell path, and Byrde lane are the other named walks in the forest. Some have gone in disuse long ago and are overgrown by the forest.
The remains of a fortress, overgrown by the jungle, can be found on two hilltops in the southeastern side of the forest, near the Forest Department nature education centre.

Udawatta Kele is on a hill ridge stretching between the Temple of the Tooth and the Uplands-Aruppola suburbs. The highest point of the ridge (7°17’55.41″N, 80°38’40.04″O) is 635 meters above sea level and 115 meters above the nearby Kandy Lake. The sanctuary contains three Buddhist forest monasteries, i.e., Forest Hermitage, Senanayakaramaya and Tapovanaya, and three cave dwellings for Buddhist monks, i.e., Cittavisuddhi-lena, Maitri-lena and Senkadandagala-lena. The sanctuary acts as a catchment area for the supply of water to the city of Kandy Udawatta Kele is a famous birdwatching site. About 80 bird species have been recorded in the sanctuary. The endemic bird species are Layard’s parakeet, yellow-fronted barbet, and brown-capped babbler Pellorneum fuscocapillus. The rare three-toed kingfisher Ceyx erythacus has been observed occasionally. Sri Lanka myna, golden-fronted leafbird, blue-winged leafbird, spotted dove, emerald dove, Tickell’s blue flycatcher, white-rumped shama, crimson-fronted barbet, brown-headed barbet crested serpent eagle, Sri Lanka hanging parrot and black-backed kingfisher are common in the forest. Red-faced malkoha and Kashmir flycatcher are two birds listed as threatened that can be found in Udawatta Kele.

Despite the forest reserve being completely surrounded by Kandy and its suburbs, there are many kinds of mammals, most of which are nocturnal. Endemic mammals that can be seen the sanctuary are the pale-fronted toque macaque, golden palm civet, mouse deer, slender loris, and the dusky palm squirrel. Other mammals are the porcupine, Indian muntjac, Indian boar,
Asian palm civet, small Indian civet, ruddy mongoose, Indian giant flying squirrel, greater bandicoot rat, Indian pangolin, greater false vampire bat, and Indian flying-fox. Several kinds of reptiles and amphibians, including endemic species, inhabit the forest. There are snakes such as the common hump-nosed pit viper, green vine snake, green pit viper, banded kukri, Boie’s rough-sided snake, Sri Lanka cat snake, Oriental ratsnake and spectacled cobra. Lizards that can be seen include the green forest lizard, Sri Lanka kangaroo-lizard and the whistling lizard. Many species of skinks, geckos, frogs and toads also inhabit the forest. Some Sri Lanka wet zone butterflies are present. Other invertebrate include giant forest scorpions, spiders such as the poisonous Sri Lankan ornamental tarantula, fireflies, beetles, jewel bugs, bees and wasps. At least nine species of endemic land snails such as the large Acavus superbus live in the forest.