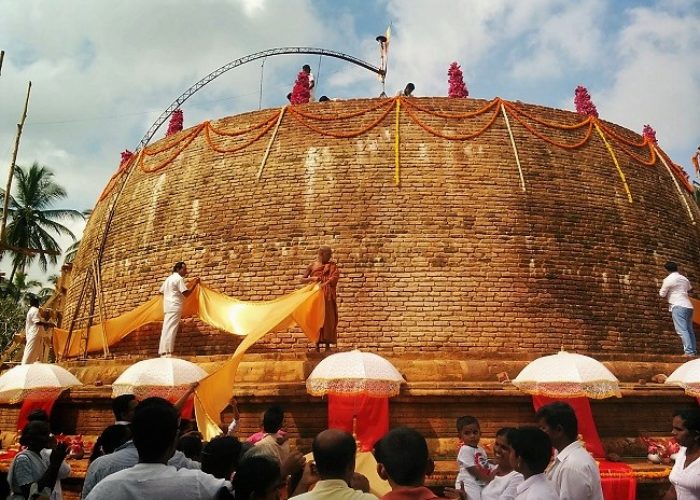 Nawagala Rajamaha Viharaya lies on the borders of the ancient Anuradhapura kingdom in Eppawala at Katiyawa village. The massive stupa of this temple is said to be build by Queen Viharamaha Devi and a queen of of king Dutugemunu (161-131 BC).

An inscription found in the vicinity has been translated by Prof Senarath Paranawithana which reads “Queen Kathiya, wife of King  Gamini Abhaya who is favored by the gods, built this temple and donated to Milanchtissa Thero”.

This stupa was seen as a massive mound of rocks covered in weed until recently when the archeology department began restoration work. This stupa is said to be the largest stupa discovered on the outskirts of Anuradhapura kingdom with a circumference of 275 feet at the bottom. The existing ruins stands up to 60 feet in height.

The excavation and restoration work on this stupa was started in March 2013 and the growth of the bushes on the stupa has been now removed exposing the majestic stupa for the first time. They have also discovered that this stupa has been enlarged in various stages and they have been able to locate the original stupa buried inside the mound of bricks.

Unfortunately this stupa has already vandalized by treasure hunters digging deep tunnels in search of treasures buried inside. Even though extensive damage has been done to the inner relic chambers, the archeologists has been able to recover a significant quantity of invaluable artifacts from the 19 relic chambers discovered inside the stupa.

The discovery includes seven granite caskets, two glass caskets, five clay caskets, ten marble caskets and two gold/copper caskets.  It is said that such a haul of artifacts has been only found in Ruwanweli Seya.

The stupa also show the same advance features of stupas in Anuradhapura town which is considered rare outside the primary area. Therfore it is assumed that a similar effort has gone in to building this stupa as in Ruwanweli Seya even though this lies on the outskirts of the capital.

Категория : Main Sights
Район / Город : NORTH CENTRAL PROVINCEAnuradhapura
Reviews
There are no reviews yet, why not be the first?
Leave a review