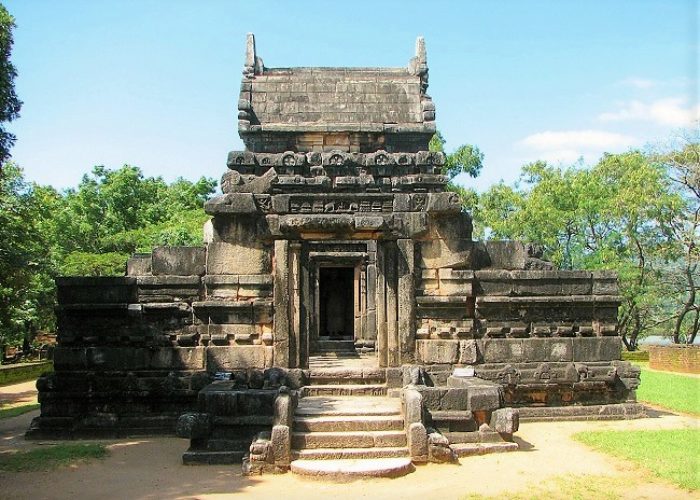 Nalanda Gedige is an ancient complete stone building near Matale, Sri Lanka. This building was an ancient Hindu Temple constructed in between 8th to 10th century with dravidian architecture (Pallava style) and then believe to have been used by Buddhists. Also some scholars describe this building is a dravidian architecture dedicated to a Mahayanaa cult with pronounced Trantric learning and known for an ancient monument of possible Vajrayana (Tantric) Buddhist affinities. Nalanda Gedige is designed like a Hindu temple with a mandapa, an entrance hall (originally roofed), a short passage to a bare cello, and an ambulatory round the holy center.

There is no sign of Hindu gods today, however, and the temple is said to have been used by Buddhists. The richly decorated facade sections, laboriously reassembled in 1975, are predominantly in the South Indian style, and may have originated in the eighth to 11th centuries, but cannot be precisely dated. However, the god Kubera appears on the south side of the tympanum over the sanctuary, and this is a feature only to be found in Sri Lanka.

Категория : Main Sights
Район / Город : CENTRAL PROVINCEMatale
Reviews
There are no reviews yet, why not be the first?
Leave a review