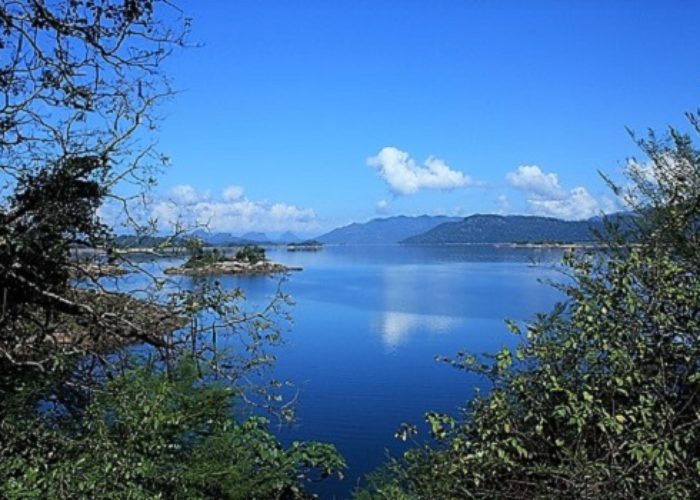 Gal Oya National Park in Sri Lanka was established in 1954 and serves as the main catchment area for Senanayake Samudraya, the largest reservoir in Sri Lanka. Senanayake Samudraya was built under the Gal Oya development project by damming the Gal Oya at Inginiyagala in 1950. An important feature of the Gal Oya National Park is its elephant herd that can be seen throughout the year. Three important herbs of the Ayurveda medicine, triphala: Terminalia chebula, Terminalia bellirica and Emblica officinalis are amongst the notable flora of the forest. From 1954 to 1965 the park was administrated by the Gal Oya Development Board until the Department of Wildlife Conservation took over administration. The national park is situated 314 km from Colombo.

The vegetation of the forest is of three types: forest, shrub and grassland. The national park contains a substantial area of savannah grasslands known as thalawa in Sinhalese and mountainous grasslands known as pathana. Thalawa grassland is dominated by rough grass species, Cymbopogon nardus (“mana”) and Imperata cylindrica (“iluk”). The burnt thalawa grasslands are known as the Damana grasslands and are used for cattle grazing by villagers. Rare plants of medicinal value such as Pterocarpus marsupium, Careya arborea, and Cassia fistula are also found in the forest. Berrya cordifolia, longan, Mangifera zeylanica, Diospyros spp., Ziziphus spp. and Mallotus repandus (“wal keppetiya”) are the common floral species.

32 terrestrial mammals have been recorded in the park. The Sri Lankan elephant, Sri Lankan axis deer, muntjac, water buffalo, Sri Lankan sambar deer, Sri Lanka leopard, toque monkey and wild boar are among them. Included amongst the reptile species of the park are the mugger crocodile and star tortoise. More than 150 species of birds have been recorded in Gal Oya. The lesser adjutant, spot-billed pelican and red-faced malkoha are some of the park’s resident birds. The Indian cormorant, Oriental darter, grey heron, and lesser whistling duck are among the common water birds of the Senanayake reservoir. The white-bellied sea eagle, and grey-headed fish eagle are the notable raptors of the area. Gal Oya National Park’s butterfly species include the endemic lesser albatross.
Reviews
There are no reviews yet, why not be the first?
Leave a review