The Palace Complex in Polonnaruwa – on the map | Sri Lanka Finder

The Palace Complex in Polonnaruwa 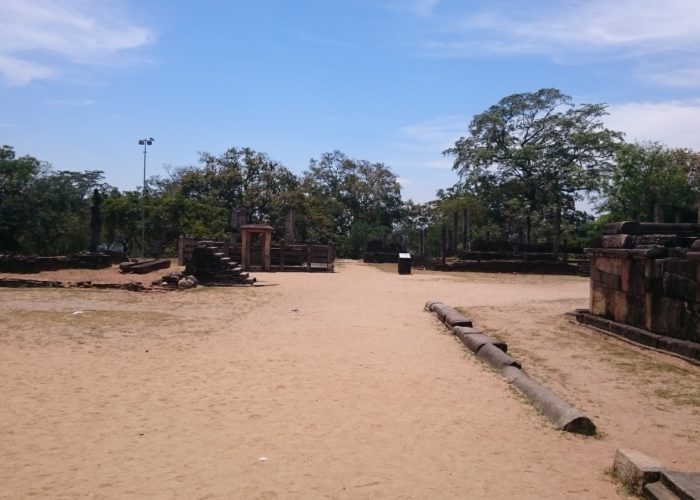 Poḷonnaruwa (Sinhalese: පොලොන්නරුව, Poḷonnaruwa or Puḷattipura, Tamil: பொலன்னறுவை, Polaṉṉaṟuvai or Puḷatti nakaram) is the main town of Polonnaruwa District in North Central Province, Sri Lanka. Kaduruwela area is the Polonnaruwa New Town and the other part of Polonnaruwa remains as the royal ancient city of the Kingdom of Polonnaruwa. In the south corner – the Bathing Pool (Kumara Pokuna), which has two of its crocodile-mouth spouts remaining. The second most ancient of Sri Lanka’s kingdoms, Polonnaruwa was first declared the capital city by King Vijayabahu I, who defeated Chola invaders in 1070 to reunite the country once more under a local leader.

The Ancient City of Polonnaruwa has been declared a World Heritage Site. Currently the new Polonnaruwa is undergoing a major development project known as the “Awakening of Polonnaruwa” under the concept of President Maithripala Sirisena. It envisions the development of all sectors in Polonnaruwa including roads, electricity, agriculture, education, health and environment will be developed comprehensively. In addition, the other interesting places, which recommended to visit in Polonnaruwa complex, are ruin’s of the King’s Council Chamber, the Royal Pavilion, the Palace of King Nissanka Malla, the Lotus Pool. All these places show the high standarts of stone craft and artistry of this era.